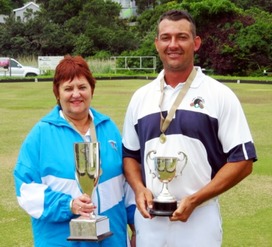 Runner-up was Stefan Helberg from Riverside, third place went to Ian Adam from Sezela and fourth to Ferro van Greunen from Southbroom.

​The two Men's winners were Dumisani Madlala from Umtentweni and Simon Schaaij from Umkomaas. The Women's winners were Annatjie Kidd from AMBC and Leoni Booth from Port Edward. All four players will receive an automatic invitation to The Masters on the 1st and 2nd October.

The winners of the Greenkeeper's Competition: Hans Wijtman and Elliot Nqoko from Southbroom. Runners-up were Dumisani Madlala and Siyabonga Gumede from Umtentweni 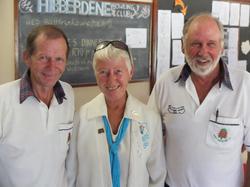 ​After a sweltering weekend for the Specsavers Pro 10 Tournament, Port Shepstone’s Eddie Fann and Alan Jacobson were the much deserved winners with The Bell’s Barry Delvin and Rassie Erasmus runners-up. Congratulations and the best of luck to all four for the National Specsavers’ Tournament later in the year. 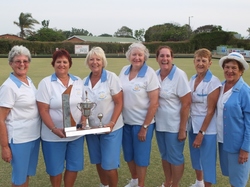 The Women’s winning team was The Bell’s “B” side with Barbara Fernihough, Charmaine van Deventer, Maureen Vorster and Olga Kay-Hards in the fours and Maureen Muller, Sandra Fourie and Valarie Boshoff in the trips.

Third place went to The Bell’s “A” side with Sandy Penny, Denise Nel, Barbara Gradwell and Michelle Vermeulen the fours with Daphne Sapsford, Pat Maggs and Mada Lindeque making up the trips.
​
Fourth place went to Margate’s “A” side with Lenie Geyer, Trixi Smith, Sharon Scheinberg and Georgie McKechnie in the fours and Annette Payne, Ann Waugh and Sandy Jeffrrey the trips. 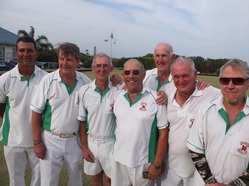 The winners of the Men’s Sevens League were Margate’s “B” side with Shane Nienaber, Ron Canning, Rennie Geyer and Brian Smalberger in the fours and Trevor Heywood, Clive Edmundson and Manny Rodriquez in the trips.

​Runners up were Banners’ Rodney Phelps, Steve Rennie, John Keppler and Glen Allen in the fours and Peter Bennett, Dave Hume and Ally Weir in the trips.

The Men’s third place went to AMBC’s “C” side with Mike Davis, Tony Hoggins, Derrick Payne and Fred Hutchen in the fours with Richard van Waltsleven, Keith Watt and Colin Hudson in the trips.